The evolution of internship 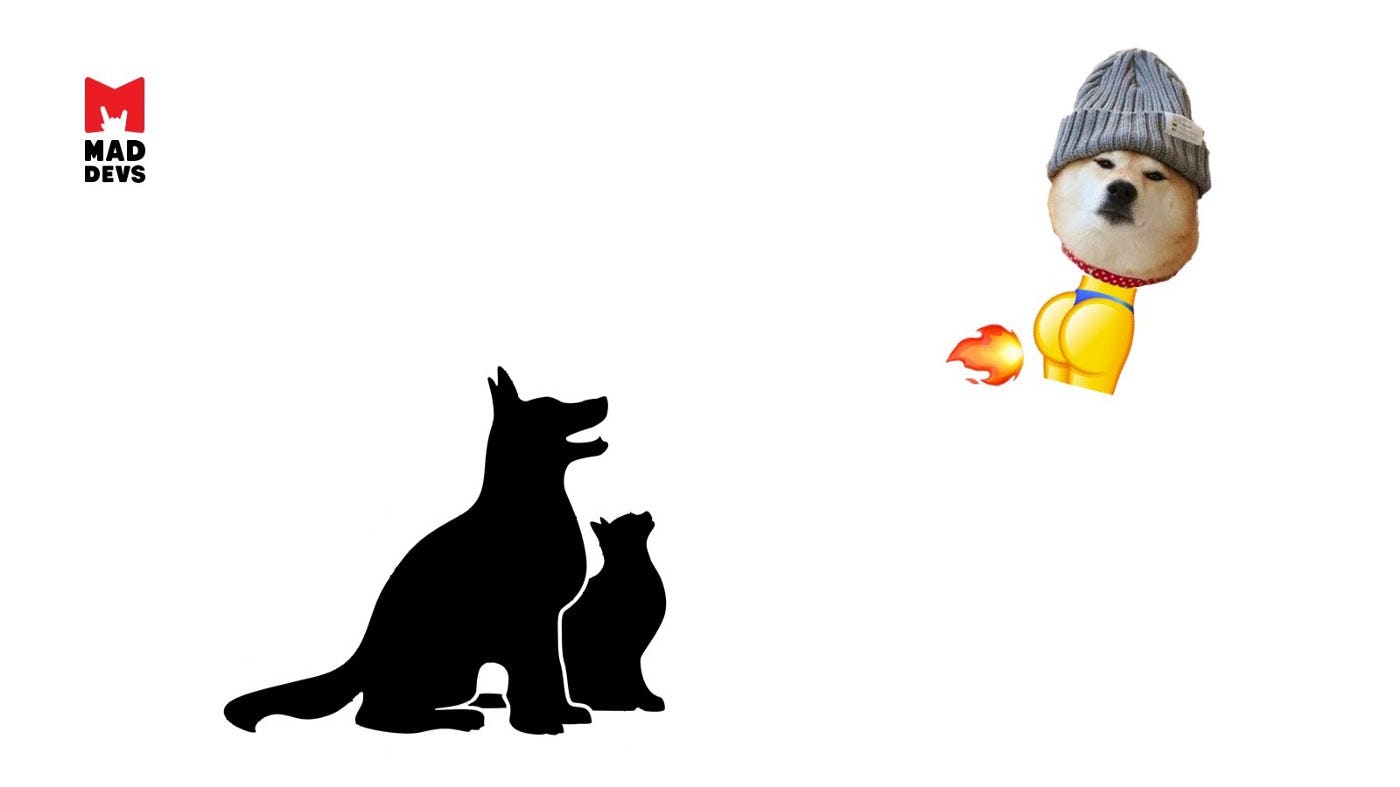 The picture illustrates the flurry of negativity in the previous article in t.me/devkg.

Internship in Mad Devs is a teaching of any person with any level of experience in software development for a very short period of time. Usually, it takes from 2 to 6 months. Practice showed that a person without any experience of programming can become a junior developer in 8 months. Experience gained before will speed up the internship process.

To make people develop it is necessary to challenge them by giving more tasks than they can complete on time. If there is no challenge, there will be discouragement and destruction.

Remember yourself. Routine is always boring. When you are bored, you look for a new job.

We have already been practicing internship for a long time. There were two periods: the first one was in 2015, the second period was in 2017.

Both internships taught me the following things:

There are a lot of types of internships. Some companies pay with money, others — with experience. Both types are viable. We give people experience that allows them to save money on courses if you are enough motivated and self-disciplined. Herewith, if you passed an internship there is a great chance that you will become a member of our team.

The first flow of interns was in 2015. All interns had the same terms:

Both flows out of 30 people gave us 5 new excellent workers in the company that now work on very serious tasks. Here is pure statistics:

Food Ordering Bot and First Test for the Intern

How interns created a Slack and Telegram bot that order lunch to your company.

All these people now work as developers (Frontend, Django/Python) and I think, they are happy about the past internship.

The length of the internship was 5–8 months.

During the previous internships, we could allow educating people on real tasks in real projects. However, now we do not have tasks that we can delegate to interns. In addition, for the past 2 years, we have changed development processes. Now we pay more attention to the quality of our products. Therefore, we write tests, implement CI/CD. Requirements for junior developers consequently increased and we faced the following problems:

A lot of problems can be definitely solved with the implementation of new processes. Yet it is expensive to introduce them to interns only. It also necessary to make new procedures accepted by the whole team, otherwise it will be additional efforts. Therefore, we made such plan:

After the announcement of the position, we added all those who sent us CVs to the telegram chat and explained the rules of the first stage of the internship. This stage is mainly aimed to understand the principles of remote work.

How to automate an internship in your company? Use our bot, which helps to monitor interns' work, remind them about standups, and collect their worklogs.

Remote work is convenient both for staff and for the company. It is beneficial for staff since they can work on Goa beach or in Thailand even if you have already been on vacation several times. It is also useful for the solution of everyday problems such as repairs or sick child. Our developers often use this opportunity. We as well have several people who worked from different countries. Some people combine work and trips. For example, I work when I go to conferences or I am simply abroad.

Remote dismissal process is a test for the ability of the person to work remotely when people are not surrounded by other working people. It is more difficult to learn new material from home or coffee house than from the office. In addition, it was obligatory to send everyday reports on work done: videos watched, articles read. If you did not send a report 3 times, then you are not an intern anymore. If you feel that the internship is quite difficult for you and do not want to continue, you feel free to give up. We need people that are dedicated to the results and want to get things done.

Internship in the office has several significant benefits. One of them is two mentors: morning and evening ones. The first one is strict and the second mentor one is kind. Their main goal is to help interns to develop faster. We use different approaches. I make people get results independently by asking guiding questions. Alexander tells about the possible solutions.

We do not criticize solution until a certain moment. At the stage, it is more important to show ready and working results.

The process looks the following way:

The more problems you solve, the faster development. Therefore, as soon the interns are ready to their own project, they are given with their own ‘pet project’ for the team. This stage teaches people the teamwork. Approximately at the same time, we start to solve interns’ problems.

All of the points above are discipline-related. Issues with discipline can be solved by positive and negative reinforcement.

How positive and negative reinforcements are implemented to teach programming for interns in IT companies.

I am sure you are wondering how dogs and cats relate to interns. The answer is simple: some interns are like cats. They are not affected by abuse, punishments, and other negative factors. But praise and other goodies work very well for them. Trainers in gyms definitely know that women work better if they are praised than if they are punished. Interns-cats are interns with cat character. Positive methods work on them to a great extent.

Interns-dogs are easier to be trained since both positive and negative influence work on them. You may hear how powerlifters motivate each other by shouting. Then, when the weight is lifted, partners start to approvingly hug each other.

In the previous article about positive and negative reinforcement the keynote was the existence of two types of reinforcement. Herewith, both types work and correct behavior. The possibility that undesirable behavior will occur tends to zero.

For us, it is very important to make interns follow our rules, be responsible and disciplined. This allows avoiding a lot of further problems. For example, it may seem that a person did not work yesterday since there are no commits and work logs. In fact, a person wrote the documentation during the whole day and forgot to write about this in the task. All of the above is told during the internship.

Final stage of the internship

In the previous post, I wrote about the methods of behavior correction that are definitely not widely acceptable. But we really appreciate interns that came to our office. By this moment, we have already spent a lot of money, time and efforts on them and therefore, we cannot fire them.

I believe in the power of communications. People themselves can tell the ways, how to help them. Before the implementation of physical exercises, I asked interns about this idea and we decided together to make push-ups the negative reinforcement.

I also believe that this approach is more effective since it is less derogative than punishment or reproval. This method corrects behavior and I have proof for that. There may be a lot of other things instead of push-ups. For example, speech with the analysis of mistakes on the work undone, or additional task on the realization of a data structure. The essence is that tasks should be negative reinforcement — action or process that will end as soon as undesirable behavior ends.

Positive reinforcement increases the possibility of desirable behavior in the future. It can be any goodies: candies, apple, pen, pencil, praise. The only criteria — it has to be something nice.

Interns themselves choose their motivators. We do not have slavery or tyranny. We are for the mental and physical health of our interns. We are for people who are able to solve tasks independently through efforts and mistakes. We are for the development of our staff. What is more, when they are taken into the company, other methods are user — no repressions or push-ups. I will cover this topic in the next articles.

How Can Programmer Grow Faster?

This post is dedicated to all, who want to learn how to program. Who does not know where to gain experience at the start, what to study, and where to go.

At last, the results of our internships:

In the next posts, I will tell more about positive and negative reinforcements and their differences from punishments.

Tech stack of prominent companies: What are industry...

Tech stack of prominent companies: What are industry giants using to power their applications?

Uber vs. Lyft, Vrbo vs. Airbnb, Netflix vs. Hulu, Hubspot vs. Salesforce, or Spotify vs. Pandora—these are the rivalries that interest most...

How to automate tasks estimation in JIRA

How to automate tasks estimation in...

How to automate tasks estimation in JIRA

IT project management is hard to imagine without planning. Planning orchestrates the work of different project departments (software development,...

Key benefits of working in commercial...

Are you looking for job opportunities in the IT field? Have you already decided what company type you would like to work for: a product-based or a...