SDLC ► Why Do You Need Software Prototyping and Mockups? 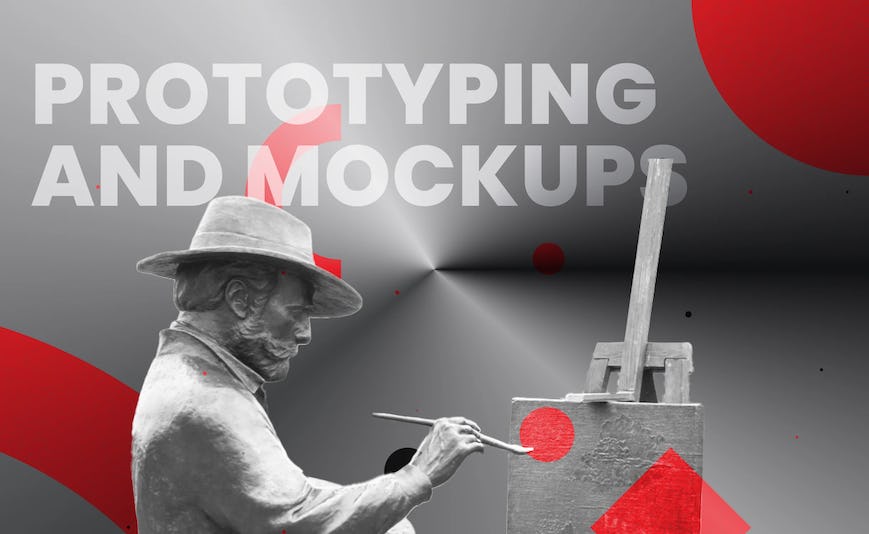 Before an idea turns into a fully functioning software product, it may come a long way from a black-and-white sketch written in a notepad to a usable app in the hands of an end-user. As a matter of fact, there are several stages in the SDLC (software development life cycle), and the two of them are a mockup and a prototype. In this post, we’ll figure out what they are, whether you need them and why, and how to build them properly.

A mockup and a prototype: What are they?

To begin with, let’s sort things out and define notions that you can come across in the software development process. The SDLC landmarks may include:

A wireframe is a schematic drawing and a high-level or high-fidelity description of the future solution. This is a black-and-white app layout depicted as a combination of simple patterns and wordings. One shouldn’t be a professional designer to create a wireframe, technically, everyone can do it. In this post, wireframes are off the subject, so let’s move ahead.

A mockup is way much closer to the future product than a wireframe as it shows the appearance of the app in full colour. This time, we can speak about mid or high-fidelity depiction—the product is presented much as it will look in its final version. The major difference is that a mockup is static, so you cannot interact with it and thus check the app’s functionality.

Mockups do not only add colour to wireframes providing a visual overview of the app but also give a sense of user experience. They display the entire range of the app’s elements, including:

Software mockups use a variety of visuals to showcase brand identity, and building them requires a mixture of creativity and special skills. That’s why, unlike wireframes, mockups must be created by professional designers.
At Mad Devs, the process of creating UX/UI designs starts with wireframing. First, our designers draw wireframes based on the user flows previously negotiated with the client. By using Miro and Lucidchart, we make the user flow diagrams of the entire app to have a full picture of the future solution. Once the wireframes are approved, the Mad Devs designers create detailed mockups based on the real data so that the client could visualize the final product.

A prototype is the next stage of a product’s evolution, and it’s very close to the final result. A prototype is a mockup made alive, which means it has both the appearance and functionality of the app. The biggest advantage of a prototype is that it enables user interaction, so at this stage, you can see how the product works.

Prototypes can have different levels of fidelity. Some of them can demonstrate the core functionality that will be present in the finished product, and some prototypes allow for minimum interaction. The main goal of a prototype is to simulate user behavior and make sure the UI and UX designs meet all user wants and needs.

A prototype is not a full-fledged solution, it is more of a product imitation. However, it has all the necessary ingredients, such as visual representation, structure, and basic functionality, that give a clear-cut idea of the future solution and aid in further planning.
Prototyping is an integral part of our software development process. First, we create interactive prototypes and test them internally to make sure the design is intuitive. At Mad Devs, prototypes are tested by PMs, QA, frontend and backend engineers. Based on the customer requirements, we can either build a high-fidelity prototype that emulates the entire product or create a prototype that focuses on just one feature. Thus, prototyping allows our designers to collect feedback from the team, customers, and end-users and tweak the designs accordingly.

Do you really need mockups and prototypes?

Mockups and prototypes are critical stages in the software development process, but they are not a must. So if you think it’s unnecessary for your project, you can skip them. But before you arrive at a decision, it wouldn’t go amiss to consider the benefits they can bring. We’ll make it easier for you by specifying the key advantages of mockups and prototypes in this post.

Why use a mockup?

Get a clear vision of your future product.

The picture you draw in your mind might be different from what you’ll get as a final result. For example, the colours you chose might not match with the logos, the images might not fit, and the typography might look awkward. Mockups come in very handy when you need to see your future solution as soon as possible and decide on changes and improvements before it’s too late.

A mockup can serve as a guide prepared by UX/UI designers for frontend developers. What’s more, this is a well-thought-out guide that contains every detail about the product that is approved by the customer, stakeholders, and everybody concerned. That means the frontend team can roadmap the development process and feel certain there won’t be a need for rework.

Save time and money.

It’s much easier, faster, and less costly to make edits before the code is written. Thus, by looking at the mockup, you can see whether everything is in its proper place and if not, replace some of the components or change the whole design quickly and painlessly. Making such corrections while coding will extend the project deadline and, consequently, increase the costs.

A mockup can be a compelling argument for either current or potential investors. Unlike schematic wireframes, mockups are vivid. They can show how awesome your product is and help you secure support from investors.

Why use a prototype?

See the product in action.

By prototyping software, designers can simulate its functionality so that you could see how the product will work and how users will interact with it in real life. Drop-down menus, animated elements, clickable buttons and links—all these features can be available in prototypes.

A prototype offers more possibilities for testing. With it, you can test the functionality, responsiveness, usability, and other characteristics of the future product. Extensive testing can help fix current issues, improve UI and UX design, and stave off potential problems.

Building a prototype is a shortcut to user feedback. By handing the preliminary version of your product to early adopters, you get a great opportunity to gather feedback and make timely adjustments. For example, you can get rid of unnecessary features, add new ones, or even change the concept of the product.

EasyEDA is a tool that enables engineers to design and printed circuit boards for devices. In this article I’d like to tell you how to install EasyEDA and how to create a new project.

After testing the prototype and collecting feedback, you can introduce relevant changes. At this stage, modifying the product is a pain-free process for developers (there’s no need to rewrite the code) and for the client (fixing a prototype is much quicker and cheaper). Resolving issues in the early version of the product can speed up further development and prevent costly redesign after the product launch.

Get on the same page.

The best-case scenario is when the project’s deliverables meet customer expectations in full. By presenting the prototype to the client, stakeholders, and investors, it’s much easier to get on the same page and make sure everybody has the same vision of the product. Once all approve it, the development team can start working on the product’s architecture and other low-level things.

In theory, your product can work perfectly well, but in practice, it may fall short of expectations. Software prototyping gives you a chance to verify your solution before it goes to production to meet every need of the end-user and avoid product launch failure.

Now that we specified the benefits of mockups and prototypes for a software project, it would be helpful to give a few pointers on how to build them. So here they are.

How to create better mockups

✔ Start with wireframes - A wireframe is a basis for a mockup, so it’s easier to begin a simple layout and then fill it with visuals.

✔ Clear up requirements - Clarify customer wishes regarding the colours, typography, navigation, and other elements.

✔ Set expectations - Discuss and fix what exactly the customer expects from the mockup.

✔ Analyze the market - To create outstanding mockups, it’s important to study the market, including competitors and target audience.

How to create better prototypes

✔ Rely on mockups - Base your prototype on the mockup previously negotiated with the client.

✔ Scrutinize requirements - Examine what functionality and features are on the client’s wish list to add them to a prototype.

✔ Define goals and expectations - Communicate every detail with the client concerning their business idea, goals, and needs to bring the desired results.

✔ Know the end-users - Understand well who will use the product to provide early adopters with a highly sought-after user experience.

How to Prototype a PCB Schematic with Easy EDA

Discover the process of creating circuitry for devices with Easy EDA ► Learn how to use the selector of components for devices and master the main device design tools.

There are more tips and good practices that can be applied to both mockups and prototypes. Thus, to achieve great results, you can also:

✔ Use diverse tools - There is a rich selection of handy tools for building mockups and prototypes, for example, Figma, Sketch, Adobe Photoshop, Axure, and many others.

✔ Don’t go overboard - Don’t overuse mockup elements and prototype features, some of them can be superfluous, not to mention a waste of time and money.

The Cost of a Mistake in a Hardware Project

In this article, we will consider common errors in the design of electronic devices and how to solve them. We will see how to calculate the cost of rolling back a batch of devices, get familiar with the main prototyping cycle.

A mockup and a prototype are the two essential steps in the software development life cycle. Either of them represents an early version of a future software solution and offers a number of benefits. We at Mad Devs create mockups and prototypes to demonstrate the product to the client and test it well before it goes to production. Feedback provided by early adopters helps our developers make timely adjustments to save the project’s budget and ensure a successful product launch.