Dogfooding: Why should you test your own products? 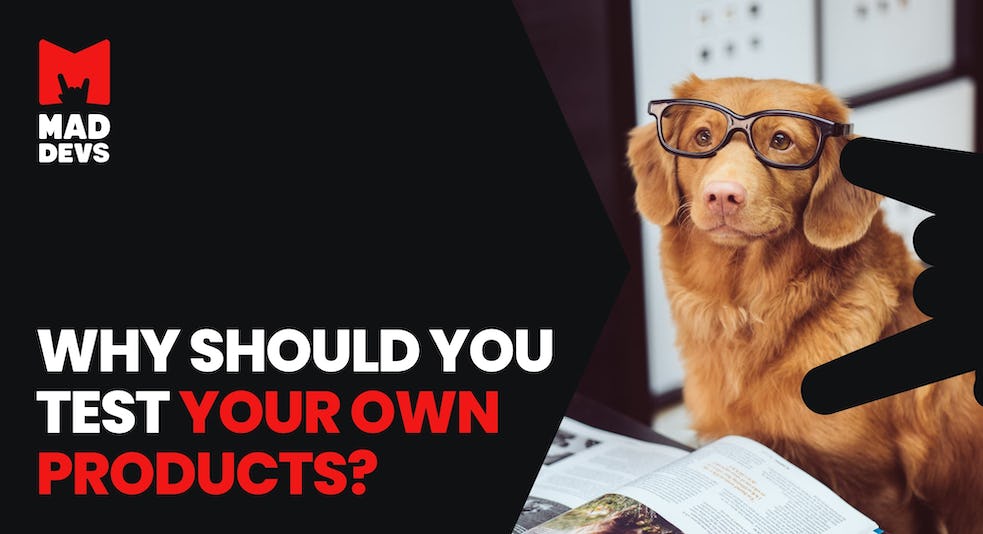 Dogfooding, eating your own dog’s food - this expression sounds strange. What connection does it have with IT? Do developers eat dog food?

Well, no. Dogfooding is not about eating dog food. This expression is used for a common practice in many companies including those that develop software.

Dogfooding, or eating your own dog food, means using one’s own product. Some history of the expression might help you to understand it better.

When we suddenly stop getting alerts, it doesn’t mean that everything works smoothly. Dogs not barking is an expression in IT that means you do not receive alarm notifications when there is obviously a system error.

One of the possible origins of the expression is from the president of Kal Kan Pet Food. He said at a meeting with stakeholders that he could eat his dog food.

While there were other options such as “icecreaming” (Microsoft), or “drinking your own champagne” (Pegasystems), nothing stuck. There were also such expressions as “the practice you preach”, or “you make your bed, you lie in it”. But dogfooding was new, crude, and something that stays in mind.

In 1988, Paul Maritz, a Microsoft manager, sent a test manager an email titled “Eating our own Dogfood” with a request to increase the internal use of the company’s product. They even named a server “dogfood” for the staff to use.

Since then, the expression has been used for the practice when a team uses the product they are working on.

Some teams skip the QA and QC stages to save time and reduce costs. Read why this approach is faulty and how software testing helps to ensure the quality and reliability of a product.

Dogfooding and not supporting competitors are different things

Before we move on, we shall understand the difference between dogfooding and the policy of not supporting competitors. So, when a car dealer encourages its employees to use the cars of the brand they sell only, it is not dogfooding. Or if CocaCola forbids its employees drinking Pepsi in offices, it is also not dogfooding.

What is the difference then between dogfooding and forbidding the use of the products of competitors?

The difference is in the approach.

You do it because you need to see how it works in a real-time application, to check whether there are any bugs, any functionalities that shall be fixed, or whatever.

So, the aim of dogfooding is to test the product and to demonstrate the company’s confidence in the things they do, not to forbid the use of other products.

Examples of dogfooding? There are plenty of them:

Whenever a company turns their employees into their clients - it is dogfooding.

Why is Dogfooding needed and whether it is needed, indeed?

Dogfooding is needed, at least in software development. During product development, dogfooding performs the function of testing (to some extent) and helps to detect errors, inconsistencies, and bugs before the product is released. After the release, dogfooding serves to show the company’s confidence in the product they have created.

Normally, dogfooding comes in different stages. While their number might differ depending on the approach and the company, the most common stages are the following:

This process ensures that the software is useful. Moreover, the testing stage starts before the software becomes available for official testing and then, for testing in beta mode.

Dogfooding benefits are not only in identifying bugs. They go far beyond this function:

If your company isn’t allowed to expose to the public what they are doing, testing by users frequently becomes unavailable. Dogfooding allows replacing it without compromising the company’s privacy. Your app is kept in a closed environment and still is tested properly - isn’t it great?

When it comes to testing, it is sometimes difficult to find proper testers for an app. Good testers aren’t cheap, and not all of them have enough technical knowledge to test all the apps.

So, by using dogfooding, you reduce costs for testers. However, even not this is the main benefit. If you are developing a highly technical product, testers might not be able to provide a proper service due to the lack of expertise. In such a case, the company’s employees are the best testers because they understand the technical side of the product.

Saves costs in the long run

Dogfooding allows to detect errors and bugs asap, frequently, it is done in the environment and by people who are working on the product. So, all the issues are eliminated asap. In the long term, it allows saving a lot of money that would be needed to track back the bugs that weren’t detected at early stages and fix them.

Develops the sense of the ownership

Being familiar with the product develops the sense of ownership by all the team members who have tested the product. It, in turn, increases their level of responsibility for the product.

Demonstrates the company’s confidence in the product

If employees use the product created by the company, it means (or should mean at least) that they trust the product and are confident in its quality and functionality.

Why do software bugs occur?

Learn why the software bugs appear though and why clients, even though they might hire an experienced team of developers, still have to pay for code with imperfections.

While offering many benefits, dogfooding isn’t perfect. It comes with some drawbacks, especially if you don’t prepare everything properly.

So, the main cons of dogfooding are the following.

If you have chosen the wrong audience who doesn’t understand the product’s purpose, you might get flooded with wrong feedback. It may even lead the development team in a completely wrong direction. In the end, it might lead to a disastrous outcome when the development team delivers a product that users will hate. So, choosing the audience for dogfooding is one of the crucial moments for the product’s success.

Too much knowledge about the product

Standing too close to something might prevent the person from seeing some major drawbacks or inconsistencies. The team knows every aspect of the app, and it makes them bad testers. They are developing an app as they see it. So, it is important to involve in dogfooding not only the team working on the product but other departments, too.

Of course, they are working on it, it is their creation. It is not surprising that some emotional component will be always present when a specialist tests his own product. It is important to eliminate the effects of such bias. So, the product shall be tested not only by the development team but by employees from other departments and even managers and stakeholders - as long as they aren’t involved in the development process.

Some people and even some specialists believe it does. However, it is absolutely incorrect. Dogfooding helps to detect bugs and so on, however, the testing and QA stages are indispensable if you want to develop a quality product.

Usually, a user passes through one time through a scenario only. For example, a signup process - how many times do you sign up for a product or service? We bet it happens once only. However, if you do it once successfully, it doesn’t mean that thousands or millions of users who are going to repeat the process will manage it as flawlessly as you did.

If you introduce the dogfooding phase into every stage of the development process, it will delay the product releases.

If a product copies something already available in the market, the team might get the so-called Non-Invented-Here-Syndrome. In most cases, it results in the product developed, dogfooded, released, and then, dropped. It doesn’t influence the team morale positively.

Do we use Dogfooding at Mad Devs?

We encourage our specialists to use the products they are developing. In most cases, our specialists are also the first users of the product we are working on. However, we understand all the drawbacks of dogfooding and do our best to prevent them.

Dogfooding is highly beneficial if conducted smartly. We understand it, that’s why we do our best to organize it properly and get all the benefits it offers.