Why Do Software Bugs Occur? 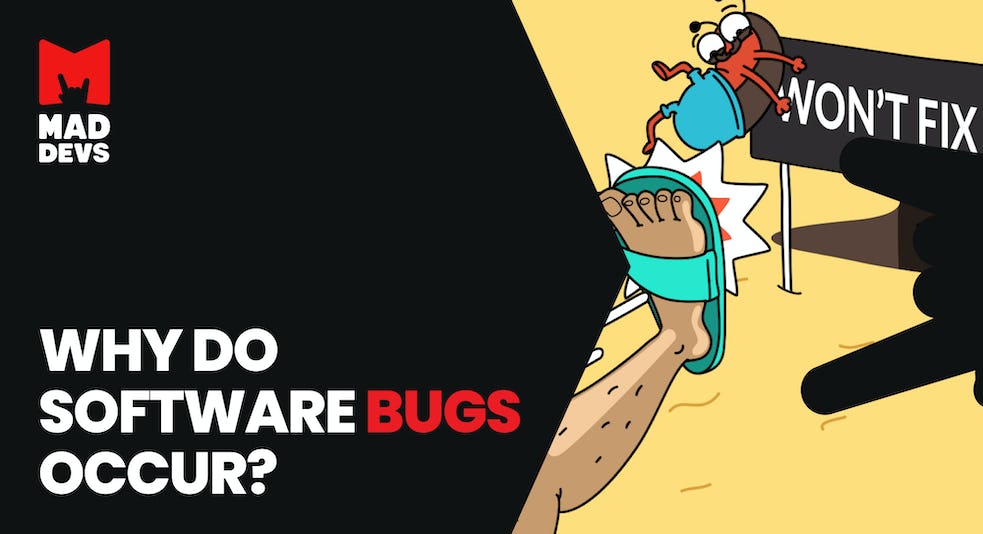 So, software bugs: what are they and why do they occur? Most likely, you know the reply to the first question. We all deal with software in everyday life, and it happens that sometimes, a program doesn’t work as expected. In most cases, it is connected with a coding error called a bug.

Why do the bugs appear though and why clients, even though they might hire an experienced team of developers, still have to pay for code with imperfections? Yep, it doesn’t always depend on a developer whether the product is going to function as expected. It depends on many factors, and you better learn more about them if you want to eliminate the possibility of bug occurrence.

It happens sometimes that a client cannot specify what functionality the product shall have. It becomes especially problematic if the product is completely new and the developer cannot compare the requirements with those of similar products.

When the requirements are changing constantly, it also causes bugs. For example, when one feature shall be removed, and it is linked to other software components, its removal will cause a bug if the issue is overlooked. Sometimes, fixing a bug in one component might result in a new bug in a different component. If the developer cannot anticipate such issues, the number of bugs might be increasing instead of dropping.

Version control is absent or insufficient

No skilled testing or prevalence of automation testing

Some companies tend to take testing lightly or ignore it at all. The lack of skilled testers, shortcomings in the procedure of testing, not giving enough importance to the procedure might result in bugs creeping the software.

Programmers can make errors. If at later stages, the product hasn’t been tested properly, if a QA stage was eliminated or reduced, such errors aren’t fixed. Thus, bugs are inevitable.

It happens that at later stages of a project, the team or a developer has to be changed. If previously, coding standards were not followed, the knowledge transfer was not completed properly, the coding documentation was incomplete or incorrect, bugs will occur. It is more difficult to deal with such bugs because new specialists have to check the entire system to find out the errors that cause bugs.

When a developer discards a code part in software, it can also cause a bug. To eliminate the bug, the old code train in all software parts shall be found and removed. When the project is big, finding such issues is difficult.

There are companies that depend too much on automated testing. Automated testing tools are good but without human intuition and proper management by an experienced tester, they might not detect all the errors.

When everything is done, and the product is up to be released, any changes in functionality, platform, infrastructure might lead to bugs. Usually, such changes cannot be developed neither can they be implemented properly. Needless to mention testing and QA stages – they are ignored at all. Thus, there is nothing surprising that problems occur.

How to not overpay for maintenance and support IT solutions at the right price? Today, Mad Devs Customer University turns to the best practices in the industry to answer these questions.

It happens sometimes that these tools contain bugs, and they pass onto your solution.

Can the software be fixed at later stages?

Theoretically, any software can be fixed at later stages of its development. The other thing is though that after a particular point, such fixes and maintenance might become too expensive, labor- and time-demanding.

This price that a company has to pay for having chosen once a simpler, cheaper, faster option is called technical debt. The more compromises were made, the more work and expenses will be needed in the future to maintain the product, implement new features, and fix occurring bugs. At some point, the maintenance and fixing issues might demand more effort than developing and implementing new features. Moreover, with time, it becomes more complicated for a developer to find out the reasons for the issues.

At some point, it becomes easier and cheaper to develop new software rather than fixing the old product.

Technical debt is the price a company will pay later for choosing a simpler, faster, yet less reliable option today. Any compromise you make to release products or features faster in the present will accumulate a greater volume of work to do in the future.

How to avoid technical debt?

The more reliable way to avoid technical debt is to do everything properly from the very beginning. The requirements for the product shall be clearly defined and described. All the needed documentation shall be in proper condition and be available (if new developers are onboarded, will they be able to understand the project and start from the needed stage after having studied the documentation?). Every new feature shall be tested and bugs, if any, shall be eliminated. All the stages, even testing and Quality Assurance shall be completed as required.

Be ready that it will take time, money, and effort. This is the only way to get a scalable project that will serve the business for long time.

We at Mad Devs focus on delivering value: we’re constantly checking how the customer will be able to benefit from anything we’re doing for them. This...

What relation does this expression have to IT and when is it used? We use it for cases when something deviates from a usual situation. Normally, it...