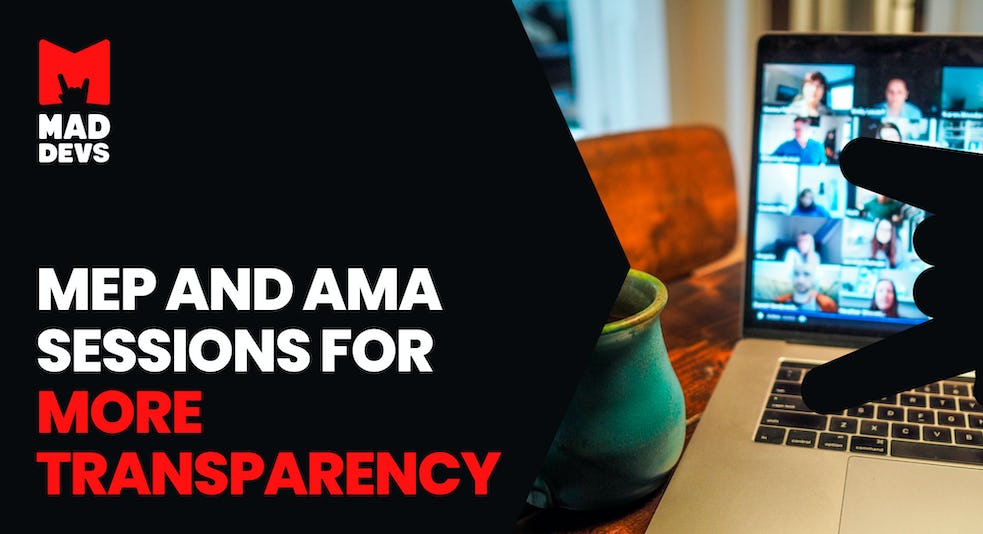 Do you trust your managers? And what about your employees? We at Mad Devs know that trust is the basis for productive collaboration. That’s why we do whatever is possible to build trust between all the team members.

One of the ways to do it is to talk. We work mostly remotely, so effective communication is what we focus on. In one MEP, it was suggested to introduce AMA sessions.

Mad Devs: How to support employees to grow in IT?

People can deliver the best performance when they are trusted and when they are supported to grow by employer. ► Discover your professional growth Opportunities at Mad Devs

What Is an MEP?

Employees know better what improvements are needed to make the working environment more comfortable. That’s why we at Mad Devs have implemented the Mad Devs Enhancement Proposals (MEP) system. MEPs are used to enable employees to make decisions within the company. The entire process looks like this:

An MEP is not our invention. Similar decision-making processes have been used efficiently in such communities as Debian, Ruby, and Python. Now, we use it in our company, and we should say that it works. Many suggestions of our employees have already become a reality, and some valid offers are being discussed now.

Here are some MEPs that have already been implemented:

Mad Community: How do we work? ► Remoute-first approach experience in IT

In this article, you'll learn everything about the remote-first approach to communications and development. ► We recite how to organize the remote process for productivity work in IT field.

Some words about AMA sessions

AMA stands for “Ask me Anything”. The idea is not ours; we borrowed it from Reddit. In May 2009, a subreddit called r/IAmA was founded. There, users could ask any questions, and a host would reply to them. Soon, this subreddit became so popular that this practice was borrowed by many companies.

At some point, we thought it would be good to implement something similar in our company. We believed it would allow our employees to communicate more openly with the company management. There were suggestions to introduce an option to ask questions anonymously, but it was rejected. The practice was introduced with an aim to promote transparency and foster the ability of our team members to talk openly about what worries and interests them.

AMA sessions take place at Mad Devs every two weeks. Within the sessions, employees can ask the company founders whatever questions they have, whether those are questions about professional growth perspectives or IT development. We recommend that our team members submit their questions in advance to avoid wasting time, but spontaneous questions are welcomed, too. Here, you can see the screen of the most recent AMA session (it took place on 07/27/2021).

These sessions are recorded and made available for those team members who could not attend the sessions.

We believe that AMA sessions are a great way to build trust, listen to the employees, and understand their needs and expectations.

Specialists play a vital role in successfully completing projects in any organization. Project and delivery managers are responsible for ensuring...

The success of any company lives and dies because of engineers' strength and ability to remove blocks. In addition, it is important to increase the...