Ageism in IT - bias and reality 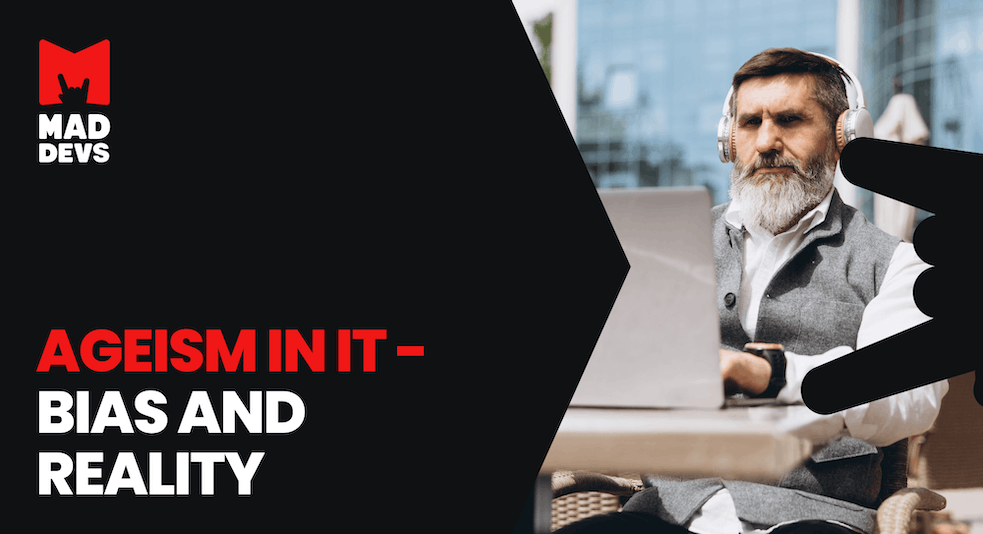 Have you ever faced ageism in the IT industry? We are sure that if you work as a developer, you have faced it or at least you have heard about it.

This topic wasn’t of much interest earlier because the industry was new, and the developers were of approximately the same age. With the industry development, the interest in it has been growing. Now, IT constitutes the base for further development. The competition among specialists is growing. With it, older specialists started facing something called age bias.

Many employers believe that young people are willing to work more for less money. And indeed, while an experienced developer would expect, say, 150,000 USD per annum, a younger specialist with less experience would ask for, probably, a half of this amount.

Therefore, a team consisting of young specialists only is believed to perform better and cost less.

How Developer Seniority Level Matter to the Cost of Software Development

At Mad Devs, we have a different opinion.

We know from experience that a company benefits more from mixed teams because every person delivers a unique experience and approach. That’s why we are happy to welcome in our team specialists with different backgrounds, experience, and of different ages:

Who Is a Mad Man? Or People You Are Going to Work With

Who are Mad Developers, and how do they work on projects? Let us tell you more about the Mad Devs team and why our clients can count on us to deliver the project.

Therefore, our main aim is to support healthy relationships between all team members. In our team, people respect each other irrespective of their experience, background, and knowledge. This is our main strength as a team. All our specialists work as a team to bring top-quality results and deliver value.

We build communication in our team based on our corporate culture. We foster team values such as open-mindedness, mutual help, respect and welcome those specialists who share these values with us.

Crunch is a term used in software development to describe working extra hours intensively within an extended period (not just one or two days) to...

Tech Stack 101: How to choose a stack of technologies...

Tech Stack 101: How to choose a stack of technologies to fit your project

The idea that developers use code to create complex applications is correct yet superficial. In reality, every development specialist will use a very...

The Path of a Mentor and an Intern ► Kratos - Atreus...

How often do you watch a movie or play a game and start to catch yourself thinking that the characters are playing real-life roles, only in a...