How to Build Backend System for Uber-like Map 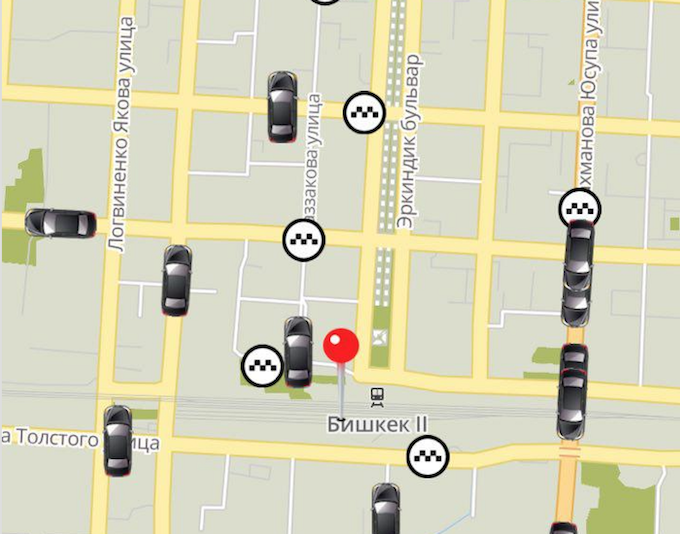 Hello there. It’s my first blog post in English and I’m going to tell you how we built simple in-memory storage for animated cars. We show animated cars on the main screen of “Namba Taxi for clients” applications. This post is about the completed journey, algorithms and not about Go.

The story begins in 2015 with the graduation work of our mobile developer. The work topic was ‘Driver application for taxi service’. In the application, he animated the car. It looked like this.

We thought. Why not using this on the screen when the client can track driver location. And our first challenge was a lack of data. We get new driver location every 15 seconds. We can’t just decrease update interval, because when driver mobile application sends data to us it gets the current order, next order and if there are any open alerts. Alert works like SOS button. When the driver presses it other drivers are in hurry to help him. And when we decrease update interval we can get more traffic to our systems. We weren’t sure that we can handle it.

Our first try was simple and stupid:

As you can guess, there were problems with it. We can’t animate a car properly and it moves through fields, forests, lakes and quarters. It looks like this

As the solution of the problem, we used OpenStreetMap Routing Machine (OSRM) for building routes and our algorithm improved. We have the same timeout.

It seems that it works now, but we faced with different problem with one-way roads

For instance, driver stays at the intersection at red point. But his device has bad accuracy and on location update driver stay on the opposite side of the crossroad. At client app we get these coordinates, save them and send to the backend. OSRM build a legit route and returns to the app and it looks ridiculous. Because marker moves very fast.

We solved this problem in a naive way. We check the shortest distance between two points and not build a route for distances less than 20 meters. With that algorithm after few days of testing, we decided to release our application and get feedback from customers.

And you know, we live in not ideal world so we decided to go to second iteration, because several things needed improvements.

I want to tell a few words about saving mobile data. We need it because in our country we have a very cheap taxi receipt. We use taxi like public transport. For instance, you can get from one side of the city to another just for 2 euros. It’s like metro in Paris. Also mobile internet cost is too high. If we save 100 bytes per second, then we’ll save 2000$ at company scale.

What the data in track?

We decided that one track should be less than 100 bytes. And we started to look transport protocol to solve this issue

As you can see we watched for several protocols:

And for us ideal option was UDP, because:

As for data serialization, we watched on:

We chose protocol buffers because it’s so efficient on little data.

And as you can see the nearest competitor is heavier twice.

What do we have in total?

But when we get data also we need to store it, right?

We need to store this data:

As mentioned above we have 600 online drivers and using these storages to save data seems non-expedient. So we need geo index

We watched for two geo indices:

We had requirements for geo index:

And KD-tree doesn’t fit our needs because it’s unbalanced and can search only one nearest point. We can implement k-nearest neighbors over kd-tree, but we won’t reinvent the wheel because R-tree already solves this issue.

It looks like this. We can perform search N nearest points and it’s balanced tree. We chose this one

You can get it there for Go programming language. https://github.com/dhconnelly/rtreego.

Also we need an expire mechanism because we need to invalidate drivers and show actual information to operators. For instance, remove driver via 900 seconds of inactivity. And also we need LRU data structure for storing last locations. Because we initialize storage for N items. When we try to add an item, when storage already filled. We remove the least recently used item and we add a new one. So here is our storage architecture

Here is the final algorithm on the backend:

We implemented these endpoints to integrate to our systems

In the end, I want to give these conclusions that we used in our backend system:

As an example, you can watch on https://github.com/maddevsio/openfreecabs. It’s too simple but implements lots of features described in the article.

Software Architecture 101 - Introduction to the World...

Software Architecture 101 - Introduction to the World of Application Design

One day I got a cool task to improve the accuracy of positioning and distance calculating based on GPS data on Android devices for the taxi service...

Concept of Unit-Tests Writing in Golang

Concept of Unit-Tests Writing in...

Concept of Unit-Tests Writing in Golang

Unit Tests in most cases are associated with a lot of wasted time. A test is an imitation of a user browsing the page. Finding errors during the...