How to Increase the Speed of Decoding of Solidity Sourcemappings

Due to the slow work of nodes decoding, there is a need to optimise source mappings analyse. Explore how to increase the speed of decoding with Python and C libraries. 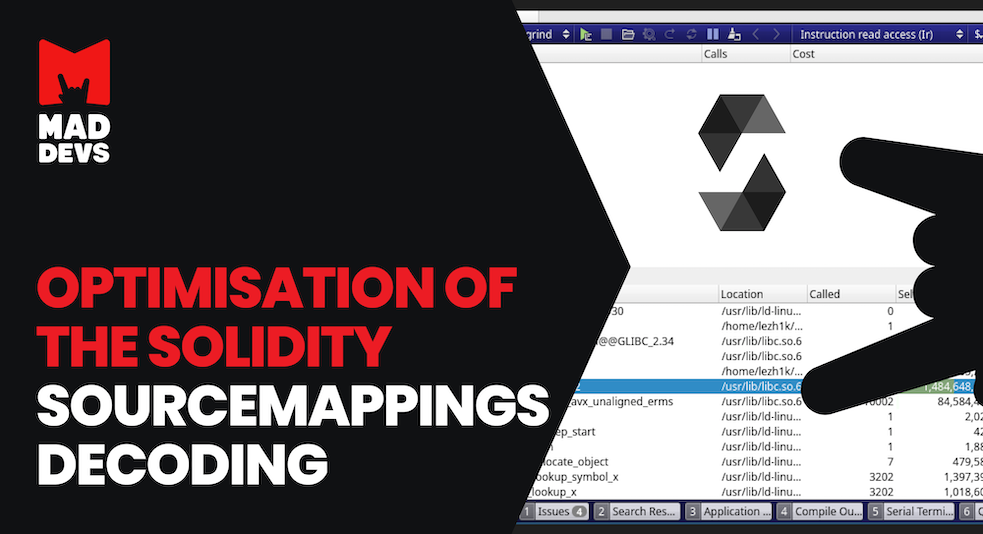 There are so many interesting and exciting tasks. When developers get such tasks; they usually try to prepare for any surprises and difficulties. In such cases, we work more on planning and add extra time to reduce risk of missing deadlines.

I faced a task that at first glance seemed like a trivial routine. One of our projects is related to work on solidity. The team makes black voodoo magic works on a solidity byte-code analyzer which should look for vulnerabilities. And in order to show the user where exactly in his code the vulnerability is, among other things, the sourcemappinigs are used. One of the subtasks is to parse these sourcemappings strings.

These strings are not as simple as they look. To compress these source mappings especially for bytecode, the following rules are used:

Actually, the task is elementary. As input, the function receives a compressed string and index. The result of this function is the decompressed node by this index. EZ! The only trick is that input strings can be very large (84 610 000 symbols in our tests).

The first implementation worked ~40 seconds. Unfortunately, its sources are missing. The main idea of that algorithm was wrong: the input string had been splitted by a semicolon symbol, then all nodes were parsed one by one from the beginning of the collection. Due to the slow work of the first solution, there was a need for optimization.

Suitability of Apache NiFi as a Metrics Collection Tool

This article aims to explore the capabilities of Apache NiFi as a means of implementing a metrics collection system and tells how to focus on useful data for improving processes and achieving business goals.

Firstly, I removed all unnecessary operations. We do not need a collection of nodes, we only look for just one specific node. So I will walk through the input string from the beginning and search for the symbol ‘;’. Then I will form a substring and fill the current node with values from this substring. Repeat until the current index is not equal to the destination index (or the end of the input string).

It is not the most accurate method to measure functions performance; but it is suitable for this case. We don't need a fight for microseconds, right?

In case somebody needs to profile Python scripts, here is my example code snippet:

As result of this snippet we get the following beautiful web page:

The execution of the first version of the algorithm took almost 9 seconds, which is not bad:

Compared to the previous version - 4 times faster. Excellent - I would say.

In theory, here it was necessary to calm down and go do something useful. But I was wondering if there is another, more effective solution for this task. For example, new string and text new instructions were introduced in SSE4.2. Maybe they can be helpful here? Or perhaps it's all about some internal mechanisms of Python?

So, I decided to continue my research. To begin with, I implemented almost the same thing in golang. Here is the source code:

What's interesting is that at first I did it without the switch, it was simple and clean. But it worked a little slower. The difference is about 0.1-0.2 seconds on average, but still… The execution of this version takes 0.88 seconds on average (on the same input data, of course). It is ten times faster than my fastest Python solution!

I offered the team to connect the existing Python solution with this golang based daemon. We could send an input string and destination index via redis, socket, pipe, etc. We can even create a file with content in /dev/shm/. I thought that in all listed cases, the overhead should be less than the profit. But this solution was denied. After all, too much time was spent on sending the request and getting the result back. Unfortunately, there are no profiling results for this solution. I took the word of the team that is involved in the project.

Then I decided to write a C library, because it can be easily used in Python applications. This is the result of that effort:

Here are more lines of source code because there are two different functions. One of them can not work with read-only strings, rather modifies the input using the strsep function. But on the other hand, it is implemented in 6-7 lines of code, quite concisely and efficiently.

The second function does not modify the input string and works even faster than the first one. After a couple of sessions with valgrind profiler, I came up with this result: 0.1 seconds. This option completely suited me, and I calmly went to bed because I was red-eyed over it for quite some time.

There are two screenshots below demonstrating why the C version works so fast. It uses SSE4.2 and AVX instructions for string operations:

After a couple of days of testing by the team, I received the feedback: it doesn’t work for them. It turns out that we need to put all the nodes in the collection and then process them further with some tricky algorithm.

Well! Back to the Python solution, because why do we need all these C-bindings and ctypes? I had modified the source code a little bit and came to this solution:

Implementation did not take much time and works relatively fast: it’s about 10 seconds. Maybe it will be enough, but I have prepared a C-based solution in advance.

I had to modify the source code and the algorithm a little bit. Full source code is available here.

The only thing left is that we need to receive a pointer to an array of structures in Python code from the C library and then use this result. There are many different tools for this case. Experienced people recommend SWIG and CFFI. But there are just two small functions that I have to import. Why should I use such big tools for this? I chose ctypes. I wanted to use numpy arrays for the result, because of their internal representation. But I did not find how I should declare the type to use in the numpy array. If anybody knows it - please, leave a comment.

So, the library returns a pointer to an array of structures (nodes) allocated inside the library. I declared a particular function to free this memory. Let’s make a RAII wrapper around these functions to call the free procedure in the destructor. This solution is good enough, but it also has its own cons:

I can assume that there is a possibility to increase the speed even more tangibly. There are even thoughts that SSO (small string optimization) may allow to reduce the number of memory copies. But we will leave that for future tasks or new material.

Actually, there are no new conclusions. It is simply that one can effortlessly link Python with efficient C libraries and not bother with Python code micro-optimization when it is necessary to optimize things. A very workable option that suited our team.

We at Mad Devs focus on delivering value: we’re constantly checking how the customer will be able to benefit from anything we’re doing for them. This...

What relation does this expression have to IT and when is it used? We use it for cases when something deviates from a usual situation. Normally, it...