How to Configure SSG and SSR on Nuxt

Everything you need to know about nuxt.js 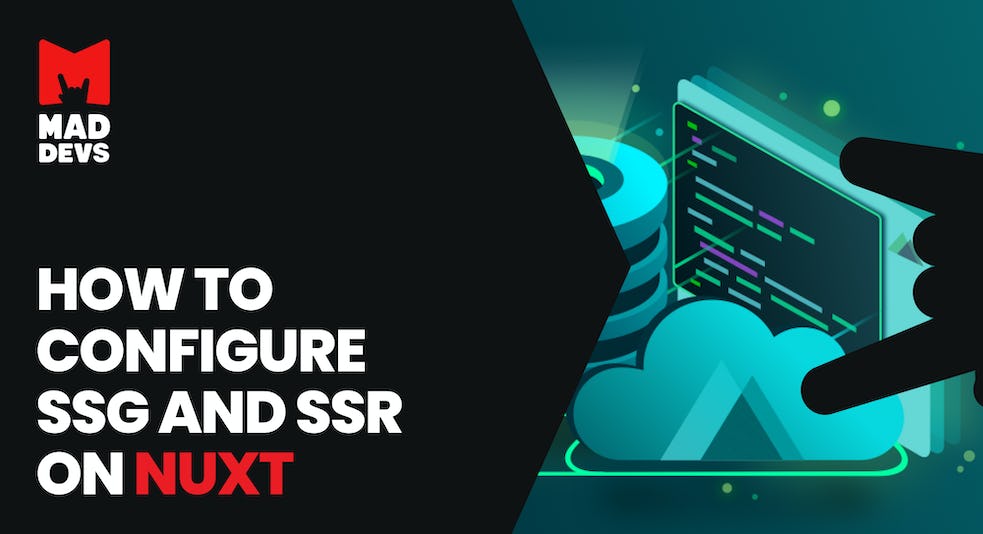 When I started learning Vue, I was pleasantly surprised by this framework. It turned out to be very simple and easy to learn. Its API had enough functionality for everyday tasks. All in all, I was delighted.

But one day, when I needed to configure a website for SEO, the internal tools of Vue were not enough. I had to dive into the depths of the Internet, where I found a framework that never ceases to amaze me.

Nuxt.js is a multifunctional, intuitive framework, or a very high-quality add-on to Vue. Its main task is to simplify a developer’s life by giving him or her all the tools needed to create websites of any complexity.

I suggest that today we take a brief look at its main features.

In this article, let’s talk about:

Separately, I will show you how to set up SSG, SSR in production and create your own API using nuxt server.

Vue Boilerplate: Fast and reliable shortcut to set up your project

A ready-made boilerplate to set up a Vue.JS project which includes the basic structure of styles, package of icons, configure the linter properly, etc.

Nuxt has prepared a ready-made structure for us, where most of the files and folders are tied to a certain functionality.

On the one hand, it allows not worrying about where and how to store files; on the other hand, it may seem that nuxt limits us. But I will tell you from my experience: there have been no problems so far.

nuxt.config.js — this file is the entry point, where literally everything is configured. It is located in the root of the project. There, you add metadata, connect plugins, configure the server, configure webpack, connect env variables, etc.

For env variables to be available in this file, you have to install the dotenv library and import it at the beginning of the file, like this:

Next, you can add variables to the env block.

If you need any other library in this file, such as lodash, it is also installed and imported at the beginning of the file.

When developing a website in Vue, I encountered the problem that I could not set up metainformation separately for each page. I had to look for plugins and set up html file generation for each route; in short, I had to do some searching. That is how I got acquainted with nuxt.

It allows you to configure general metadata for all pages, as well as individual data for each page.

General metadata is configured in the nuxt.config.js file, in the head block. Here’s an example:

The settings for an individual page are specified in the page file, in the pages folder.

You can read more about metadata settings on this page.

As I wrote above, we create pages in the pages folder. This is simple. When you add a file called Blog.vue to this folder, nuxt will create a new route — http://localhost:3000/blog — which will be the link to the blog page.

If you need to create a page that will be responsible for an individual blog post, you can do it like this:

Basic and important information on how to create and set up PWA(Progressive Web Apps) technology on a real example.

Since nuxt has several modes of operation, not all plugins can be plugged directly into components. This is due to the fact that components are pre-processed on the server, where there is no window object, document, or in general the browser API. Because of this, there will be errors.

To solve this problem, in the nuxt.config.js file, there is a special array — plugins, in which all plugins are connected.

Let’s connect some to give an example. In the plugins folder, create a file with the name of the package; I installed v-tooltip. In the file, add the following settings:

Then go to nuxt.config.js and connect the new plugin.

How to quickly validate forms in Vue.js?

In this article you'll learn what form validation is and how quickly and easily set up it in Vue.js.

Under the hood, Vuex is used.

The nuxt development team decided to make life easier for us by writing an additional add-on for vuex, which helps to write less code and therefore fewer bugs.

To add a module to the nuxt repository, it is enough to create a new file in the store folder, in which variables, actions, mutations, and getters should be specified. The name of this file will be the name of the module that will be called in the code to get the required data.

Below, I’ll show you an example of a module that requests a list of products via API:

And somewhere in the code, we try to get this data:

Static site generation — this method of project deployment is more suitable for websites that do not have dynamic pages.

The essence of SSG is simple — when a project is built for production, ready-to-use html files will be generated in the dist folder. With them, we will work further. Also, we will need to add our own server, which will run the project (I will tell below about this).

Server side rendering — will be the best solution for a project where pages are created in real time, i.e. through the admin panel, for example, pages of the blog.

In the case of SSR, a server built into nuxt will be running in production, which will ensure that new html files are generated in real time when new data is received, e.g. via API. You won’t have to restart or configure anything on the hosting side; nuxt takes care of it.

Well, here we get to the main topic of the article, where we will set up the project for two different types of work.

We will need an Express server.

Let’s install and add settings for it.

In the root of the project, create the file index.js — it will store all the server settings.

Next, in nuxt.config.js file, you need to specify static value for the target key. This will mean that nuxt will work in html file generation mode in dist folder. This is the folder we set our server to.

Also, in the settings file, you will have to list all the pages that are to be generated. Find the generate key and specify the required pages.

In this case, the main page and the About page will be generated.

Now, you need to run the command to generate

In the dist folder, css, js and html files will be created; that is all that is necessary. And all this will be compressed and optimized.

If you need to set up a project on hosting, I suggest you read one of my articles. It will help you get your project up and running quickly and without any problems, and it will be completely ready for production.

But that’s not all. I highly recommend that you check out the project where SSG was set up until recently. There, you will find everything you need in case you want to set up SSG in your project, too.

Setting up SSR is actually easier than SSG because nuxt provides its own server. We don’t have to install express or configure anything; everything is ready and configured.

There are three steps you need to take to get it up and running:

With a successful start, the console will display the following message:

The message shows: nuxt indicated that it is running in the production mode, where everything is optimized and compressed.

Now, you don’t need to specify in generate which pages to generate. Nuxt will generate html in real time.

Creating an API on the nuxt server

By setting up SSR, you can create your own API, which gives even more possibilities.

For example, a website has a form that should mail data. In order not to describe all the logic on the frontend side and not to show the tokens, you can create a separate API point, write a simple smtp server for it, and easily send requests to it. In this case, we will not load frontend with additional code + all the tokens will be on the server side, which is much safer, and you won’t need to pay for a third-party API, which will do the same things but for a fee.

First of all, create two folders. One general — server, where all server files will be located; the second — middlewares will be added to the folder server; it is needed for API points.

Create a file called logger.js in the middlewares folder and put some simple code in it.

When we access it, it will only display a message to the console.

Then, in nuxt.config.js file, add a new key serverMiddleware. In it, you need to specify the path to the API point and the address where it will be available.

Now, if you query http://localhost:3000/api/log, you will see the message “Hello world!” in the console.

In this way, you can write any handlers that help simplify the logic on the frontend, making it easier, more accessible, and faster.

How to Configure Apollo GraphQL in Nuxt Application

Learn how to set up Apollo GraphQl in a NuxtJS and take care of both the client-side and server-side. As a result, you will get a framework for developing a full-featured application.

Everything I wrote above can be seen on a real example here. We are actively working on our website, where we try to apply the best of Nuxt. There, you can read more details about SSR.

I recommend reading the official Nuxt documentation; it has a lot of interesting stuff.

Vue Boilerplate: Fast and Reliable Shortcut to Set Up...

Vue Boilerplate: Fast and Reliable Shortcut to Set Up Your Project

When starting a project in Vue, I constantly faced the fact that I had to set up the store again and again, add the basic structure of styles, look...

How to Quickly Validate Forms in Vue.js?

How to Quickly Validate Forms in...

How to Quickly Validate Forms in Vue.js?

Today I want to show you how you can quickly and easily set up form validation in Vue. I hope this article will save you time and provide you with...

Software Architecture 101 - Introduction to the World...

Software Architecture 101 - Introduction to the World of Application Design